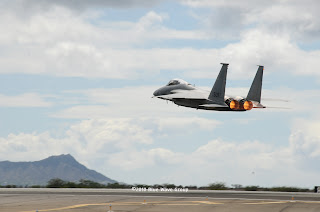 This Hawai‘i Air National Guard F-15C Eagle roars off of HNL's "Reef Runway" with its afterburners lit. It went on its last training sortie before its retirement. We were on an adjacent taxiway as two F-15Cs and an F-22A Raptor departed in full afterburner. Not only was it loud, but we could feel the roar as each fighter passed by. Members of the local news media and social media were invited by the Hawai‘i Air National Guard to attend this event.
Posted by Blue Wave 707 at 00:15

I love that sound and that feel...