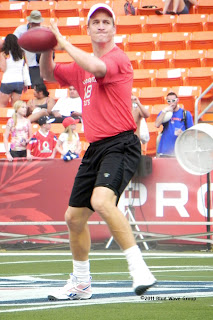 AFC quarterback Peyton Manning (of the Indianapolis Colts) drops back to throw a football during pre-game warm-ups.
San Diego Chargers quarterback Phillip Rivers started the game, and Manning came in the second quarter for two offensive series. During his brief appearance in his 11th Pro Bowl, Manning was in for seven plays, went 2/5 in passing for 12 yards, no touchdowns, and one interception (by Atlanta Falcons [NFC] cornerback Brent Grimes).
Posted by Blue Wave 707 at 00:07

I don't know much about football, but I've definitely heard of him. That's a nice action shot!