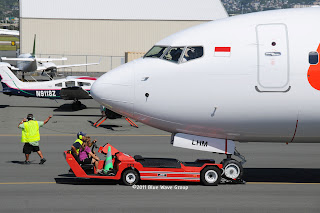 The ground crew from Castle & Cooke Aviation tows out this Lion Air International Boeing 737-900ER from their ramp, after its fuel stop at HNL. A narrow alleyway sits between the active taxiway and the Castle & Cooke ramp. Normally, 737 pilots will taxi to (and from) the ramp on its own power, as its wingspan will not be a factor as long as they stay on guideline. The Lion pilots, however, request to be towed out, though they taxi in on their own.
The woman in the purple on the tug is one of Castle & Cooke's concierges. The crewman walking is watching the starboard winglet.
This Lion 737-900ER is a brand new airliner that is making its island-hopping delivery flight from Boeing Field (Seattle) to Jakarta. The fuel stop at HNL lasts only a couple of hours. Lion deliveries like to make brief fuel stops along the way, instead of making two overnight stops.
Posted by Blue Wave 707 at 00:28

I'd be nervous if I had to tow something that big!