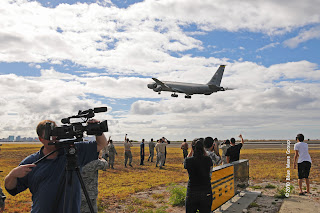 One of the KC-135R Stratotankers from the Hawai‘i Air National Guard's 203rd Aerial Refueling Squadron departs after the last three Hawai‘i ANG F-15C Eagles made its farewell flight to the US mainland. The Stratotanker supplied fuel for the three Eagles, and each fighter received six refuels during its flight from Hawai‘i to Nevada.
Personnel from the 199th Fighter Squadron wave as the tanker takes off.
Posted by Blue Wave 707 at 00:29