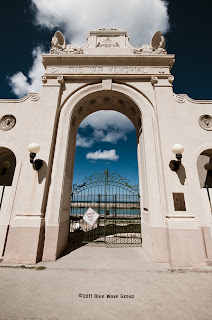 On this day, we honor all veterans of the US Armed Forces who dutifully served our country, and to those who laid down their lives to protect the freedoms we enjoy.

The Waikīkī Natatorium War Memorial stands at the east end of Waikīkī, as a memorial dedicated to those from Hawai‘i that were killed in World War I. Built in 1918, it featured an ocean water swimming pool and concrete bleachers. Duke Kahanamoku, Johnny Weismuller, and Buster Crabbe were among the notables who raced in the 100-meter-long pool.

The memorial pool has been closed to the public for years, due to the eroding concrete. It has been the subject of intense debate, on whether to demolish the entire Natatorium, or preserve some, or all, of the 90+ year old structure. Currently, there is work being done to preserve the west end seawall.
Posted by Blue Wave 707 at 00:25