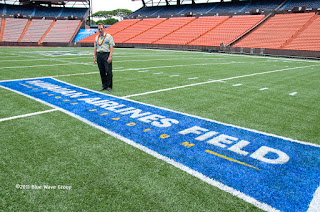 This past August, Hawaiian Airlines announced that they will be the new corporate sponsor of the UBU Sports S5-M artificial turf that was installed in Aloha Stadium. Now called Hawaiian Airlines Field at Aloha Stadium, the airline has signage in and around the stadium noting the sponsorship. In today's photo Hawaiian Airlines president and CEO Mark Dunkerley poses on the signage painted onto the turf.
Posted by Blue Wave 707 at 00:09