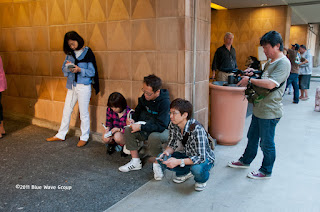 The theme week for March is the New Year's Japanese TV paparazzi at HNL. Each New Year's season, Japanese TV networks have reporters and camera crews positioned outside the International Arrivals exit at the  Honolulu International Airport. Over the past two-plus decades, I had been one of the camera operators with Nippon Television, and TV Asahi, but in the past couple years, I've been off the assignment. Basically, the assignment is to get interviews with Japanese celebrities as they exit. Out of curiosity, I ventured down to HNL one day before the end of 2011, to hang out with some of the camera crews I've known since I began doing this shoot.
Leading off theme week, is a photo of the reporters who wait and watch to spot any Japanese celebrity to get a brief interview with.
Posted by Blue Wave 707 at 00:07