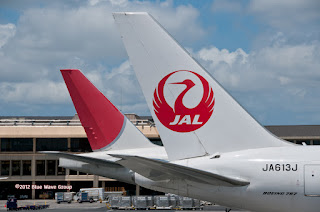 There is the old adage that says that everything old is new again.

Over the past few decades the Tsuru (Japanese crane) logo was synonymous with Japan Airlines. Several years ago, the airline decided to re-brand, to get rid of the tsuru, and replace it with a variation of the rising sun red circle on their national flag. It was the a big topic among aviation enthusiasts and the Japanese populous. While going through their bankruptcy proceedings over two years ago, the airline decided to bring the tsuru logo back.

Today's photo shows the two liveries, past and present. The Boeing 777 in the background wears the rising sun tail logo, while the Boeing 767 in the foreground wears the "new" tsuru logo.
Posted by Blue Wave 707 at 00:59