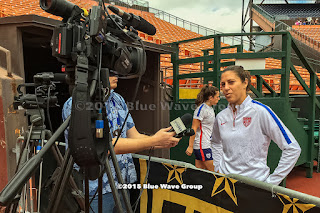 Carli Lloyd, from the US Soccer's Women's National Team, does an interview with Hawaii News Now prior to their practice at Aloha Stadium. The team was scheduled to play Trinidad & Tobago for an international friendly victory tour, after the team won the 2015 FIFA Women's World Cup. The night before the match, the USWNT called off the match over concerns over the quality of the artificial turf.