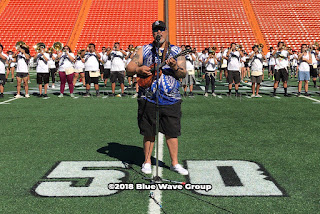 This past Monday, Hawaiian music legend Uncle Willie K passed away from his battle with lung cancer. Willie Kahaiali‘i was known for vocally venturing into opera, rock, and blues, besides playing Hawaiian music, as well as an excellent ‘ukulele and guitar player.

I had the privilege to produce the video for the 2016 ‘Ohana Cup Rugby Festival Concert, which Uncle Willie headlined. It was an amazing performance, as showed his vocal, guitar, and ‘ukulele virtuosity.

We send our condolences, thoughts, and prayers to Uncle Willie's ‘ohana. Heaven gained a great singer and musician.
Posted by Blue Wave 707 at 00:11