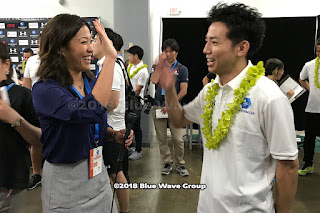 KITV Sports Director Brandi Higa and Japanese comedian Yuji Ayabe high five each other following the 2018 Pacific Rim Cup press conference at Aloha Stadium.
The Pacific Rim Cup is an annual soccer tournament that features two J-League teams against two Major League Soccer teams.
Brandi Higa has since moved on as a spokesperson for the City & County of Honolulu.
Posted by Blue Wave 707 at 00:04