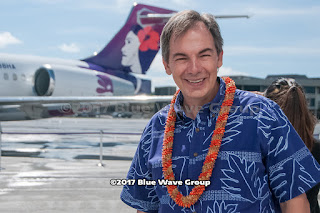 Mark Dunkerley served as the president and chief executive officer of Hawaiian Airlines for over 17 years. He oversaw the growth of the airline from an inter-island and west coast airline, into a major airline in the Asia Pacific Rim.

This photo was taken after the airline unveiled its modified Pualani logo and livery at a ceremony at the Hawaiian Airlines Cargo Facility. In the background, is the Boeing 717-200 that was the first in the fleet to have the newer livery.