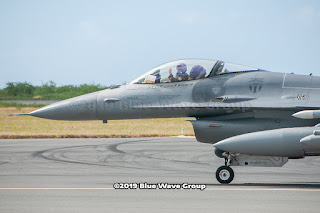 With Veteran's Day on Wednesday, we would like to honor of all the veterans who have served in our armed forces, thank you for your service!

A pilot from the District of Columbia Air National Guard's 121st Fighter Squadron gives me a wave from his F-16C Fighting Falcon pilot, as he taxies out to Runway 26L for departure. A detachment of four F-16s and a tanker, were returning to their base.