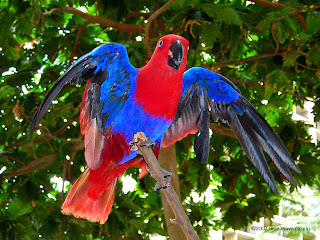 This macaw actually posed for this photo on cue as I pointed my camera at it. What a ham! And it stayed like that for another minute, trying to get me to take more photos of it. This is one of the several parrots the Hilton Hawaiian Village has on display around the resort.

Oh, by the way, do not adjust your monitor, the colors you are seeing are real. The flash highlighted the colors of the macaw. 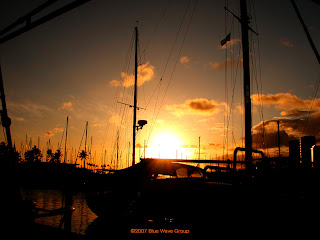 The sun sets amidst the boats of the Ala Wai Marina.
Posted by Blue Wave 707 at 00:09 No comments: 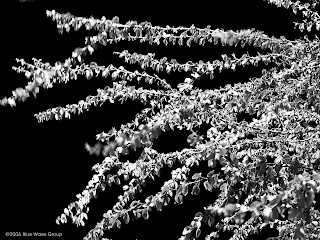 I shot this tree which was lit only by street lights, and monochromed it. I wanted only the night sky as the background, to add to the contrast.
Posted by Blue Wave 707 at 00:32 No comments: 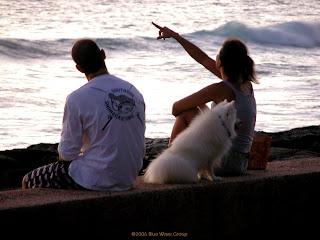 It's definitely not Superman. I don't recall what type of plane she was pointing at. This couple was one of many admiring a winter sunset from Kaka‘ako Park.
Posted by Blue Wave 707 at 00:36 No comments: 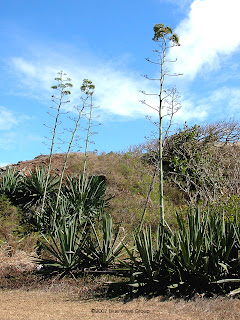 I saw this plant while on a video shoot, and thought it sure looked like agave. Those I was with thought it wasn't. I did some research on Wikipedia, and sure enough, this is an Agave Deserti plant. Agave in Hawai‘i? Yes! Right here, in the photo above.

Mostly used for medicinal purposes, this variety of agave can also be used to make ... yep, you guessed it ... tequila! Hey, here's a new one for the marketers ... Hawaiian Tequila.
Posted by Blue Wave 707 at 00:02 1 comment: 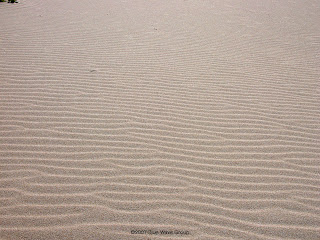 There aren't too many beaches on O‘ahu where the sand is untouched for long periods of time ... I found one.
Posted by Blue Wave 707 at 00:45 No comments: 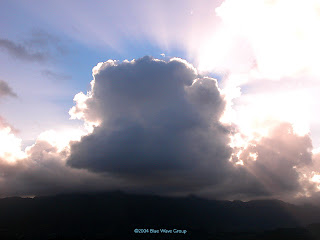 One of my favorite types of shots ... the sun's rays extending from the clouds. This reminds me of God's glory.
Posted by Blue Wave 707 at 00:29 1 comment: 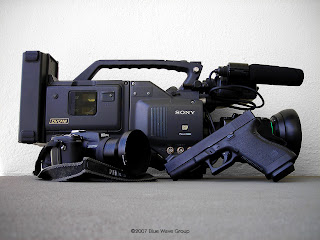 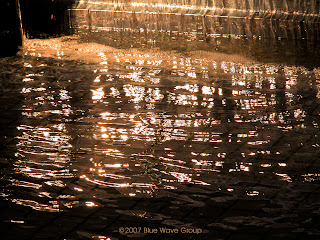 The sun reflects off of bronze-tinted glass onto the water ponds at Tamarind Park in downtown Honolulu.
Posted by Blue Wave 707 at 00:00 No comments: 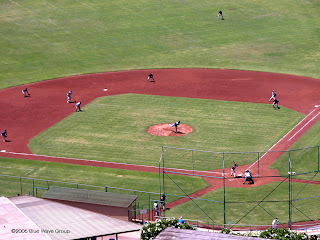 Today is the Summer Solstice ... the first official day of summer ... and what defines summer? America's national pasttime ... baseball. 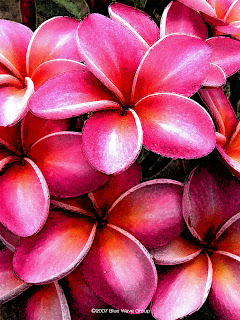 Thanks to the magic of Photoshop, I turned this photo of these plumeria into a watercolor painting.
Posted by Blue Wave 707 at 00:34 1 comment: 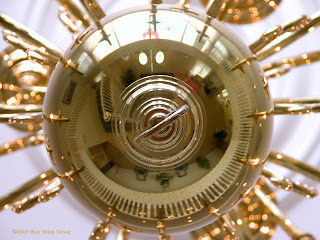 This chandelier offers a 360 degree view of the room in which it hangs.
Posted by Blue Wave 707 at 00:34 No comments: 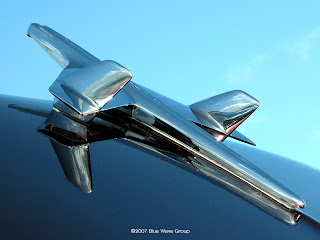 This has got to be the all-time best looking hood ornament ever ... from a 1955 Chevrolet Bel-Air.

The design of this hood ornament reminds me of the US Navy's Chance Vought F7U "Cutlass", also from the 1950s.

Got this shot from the Classic Car Show atop the Kahala Mall parking structure.
Posted by Blue Wave 707 at 00:21 No comments: 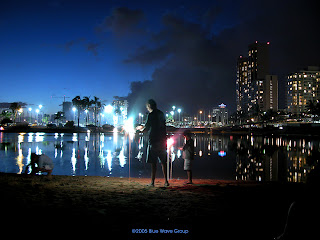 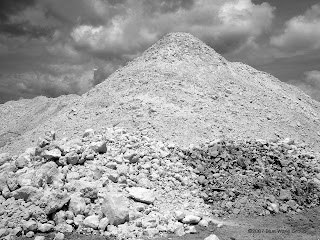 Well, maybe not a mountain, but a huge mound of crushed coral from an empty lot that was being excavated to lay the foundation of a new building.
Posted by Blue Wave 707 at 00:02 No comments:

"D No Gekijyo In Hawaii" 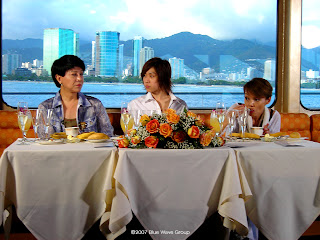 A segment of the Fuji Television variety show, "D No Gekijyo", was videotaped in Hawai‘i this week. The segment featured onnagata actor Saotome Taichi. An onnagata is young man who portrays women in Japanese Kabuki theatre. Taichi-san has gained popularity for his roles in his family's theatre troupe, though he also does male roles as well. Fuji Television documented Taichi's trip and perfomances which were the first outside Japan.

In today's photo, "D No Gekijyo" segment hosts and enka singers Mikawa Ken (left) and Ken Naoko (right) interview Taichi-san aboard the Star of Honolulu dinner cruise ship. This segment is scheduled to air at the end of July on Fuji TV in Japan.

Taichi-san and fellow onnagata Tachibana Daigoro made an appearance at the Hilton Hawaiian Village for the media, and drew quite a bit of attention from hotel guests and beach goers. Many of them not knowing the two in kimono were men. In many other cultures, men and boys played womens roles in their performing arts ... ancient Greeks, Shakespearean era, ancient Hawaiian hula and Japanese Kabuki. I would have got a shot of Taichi-san in costume, but was too busy running sound for one of the documentary teams.
Posted by Blue Wave 707 at 00:05 No comments: 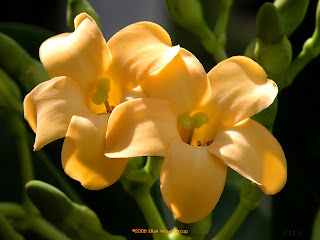 These Puakenikeni flowers bloom white, then change to this yellow-orange color after a few days.
Posted by Blue Wave 707 at 01:30 1 comment: 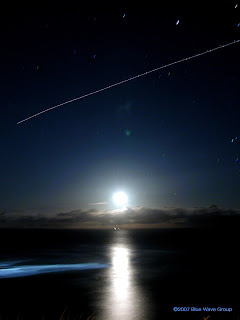 A mainland bound flight crosses the frame as the moon rises above the horizon. The spotlight from the lower left corner is from a house shining out into the ocean from Black Point. I took this photo during the last full moon phase from the Diamond Head Lookout.
Posted by Blue Wave 707 at 00:37 No comments: 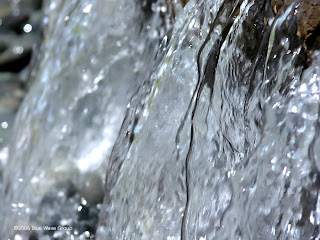 The little waterfall in the back of the University of Hawai‘i School of Medicine. I was there doing a photo shoot, and got this shot during one of the breaks.
Posted by Blue Wave 707 at 00:25 No comments: 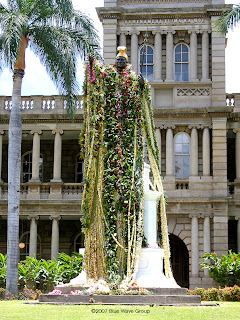 June 11th is Kamehameha Day in Hawai‘i, and is one of our state holidays that honors Kamehameha I, who unified the Hawaiian Islands under one rule, which became the Kingdom of Hawai‘i in 1810. Also known as Kamehameha The Great, he reigned until his death in 1819. This holiday was established by Kamehameha V in 1871, and continues on today.

This statue of Kamehameha I stands in front of Ali‘iolani Hale, which currently houses the state Supreme Court. It is decorated with floral lei the night before a floral parade that honors Hawai‘i's first king.
Posted by Blue Wave 707 at 00:14 1 comment: 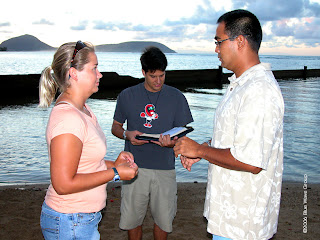 One year ago today, Marcus and Brenda were married in a beachside sunrise ceremony. Pastor Joel of Hope968 presided over the wedding. This photo was actually from their rehearsal, the morning before their big day. I actually did their wedding video, and used the stills to check the lighting at that time of the morning. God blessed their wedding day with clear skies, and an awesome sunrise.

In the almost 20 years I have been shooting wedding videos, this was the first time I had shot a sunrise wedding. I guess there are still firsts for someone who has shot over 5,000 wedding videos.

Marcus & Brenda, Happy 1st Anniversary! May you have many more anniversaries to celebrate!
Posted by Blue Wave 707 at 05:35 1 comment: 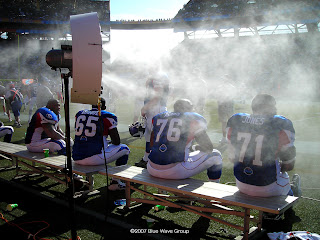 This one's for all those football fans jonzing for some football.
Posted by Blue Wave 707 at 00:32 No comments:

The Audience Is Watching 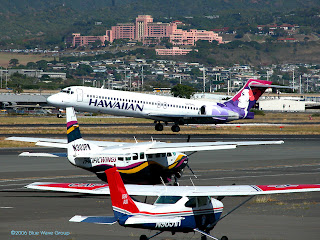 These two small planes in the foreground watch as this Hawaiian Air Boeing 717-22A, N475HA "I‘iwi", is about to touchdown on HNL's Runway 26R. Looks like the little birds are watching (and scoring) the bigger bird's landing.
Posted by Blue Wave 707 at 00:27 No comments: 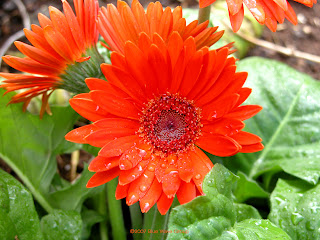 One of the more popular flowers found at a florist ... and one of my favorite ones to photograph, though I found these in a garden.
Posted by Blue Wave 707 at 00:17 1 comment: 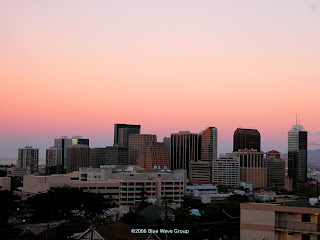 The downtown skyline in the early morning, as the sun rises and turns the sky these vivid colors.
Posted by Blue Wave 707 at 00:05 No comments: 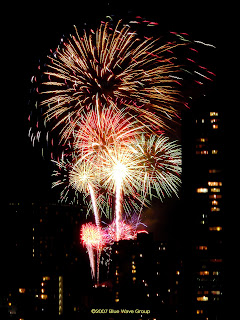 The Royal Cosmetics Company celebrated their 20th Anniversary with a bash in Hawai‘i, that included a 15-minute fireworks show that lit up Waikiki last night. The launch barge was placed abeam the Royal Hawaiian Hotel.

At first, I thought thie fireworks show had to with the Moana Hotel's anniversary, but my source there said it was not.

I was at my folks for dinner, but the only camera I had was my little CoolPix L3, but it does have a "fireworks" setting. I was without my tripod, so I had to use the railing ledge to try & keep still. Had I known about the display, I would have brought my good camera with me. Oh well ...
Posted by Blue Wave 707 at 06:48 No comments: 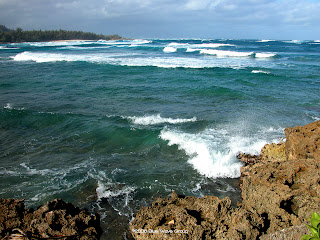 High tide at the Turtle Bay Resort on a winter morning.
Posted by Blue Wave 707 at 00:12 No comments: 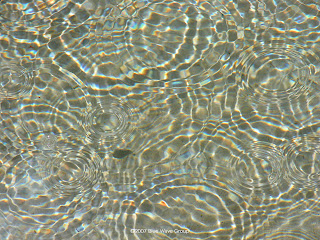 Water drops from the fountain at Kawai‘ahao Church make ripples in the pool below.

I took this photo with a 1/1000 sec shutter speed to catch as many circles as possible. A few seconds later, I shot video of this same spot, with the same shutter speed, I could really see the ripples develop, especially in slow motion.
Posted by Blue Wave 707 at 00:03 No comments: 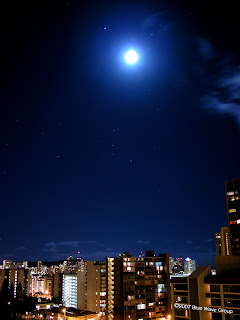 A blue moon is when there are two full moon cycles in the same month. May was one of those months with a full moon on the 1st and the 31st. It's not common occurrence. The last time it happened was three years ago, and the next one will happen on New Year's Eve 2009. I got this shot from my front balcony late Thursday evening.
Posted by Blue Wave 707 at 00:10 No comments: 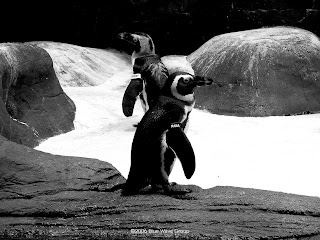 With all the films starring penguins ... I thought it should be my turn to jump on the bandwagon. I got this photo while at the Hilton Hawaiian Village ... black and white bird, black and white photo.
Posted by Blue Wave 707 at 00:12 No comments: