This jack-o-lantern family was part of a display a house had set up in a near-by neighborhood.
Posted by Blue Wave 707 at 00:00 2 comments: 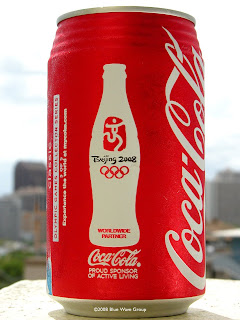 When I did August's theme week of the Beijing Olympics, the original intention was to find products with the "Official Sponsor" tag. Couldn't find a whole week's worth, so I changed it to the Air China logojet. This was one of the first products I had with a Beijing 2008 logo on it.

CocaCola came out with collector cans and bottles with flags of different nations on each can.
Posted by Blue Wave 707 at 00:33 1 comment: 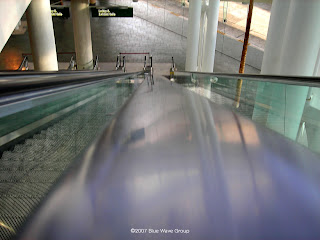 The down escalator at the Hawai‘i Convention Center, that goes from the third level to the ground level, non-stop.
Posted by Blue Wave 707 at 00:52 1 comment:

I came across these white Rosemary flowersat in the landscaping at a wedding chapel.
Posted by Blue Wave 707 at 00:20 2 comments: 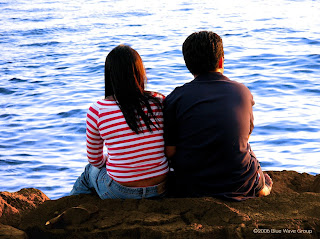 While photographing a sunset, I saw this couple in front of me, and thought it would make a cute shot. I also played around in Photoshop around them.
Posted by Blue Wave 707 at 00:13 1 comment: 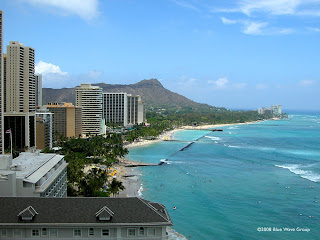 The Waikīkī Beach shoreline, and Diamond Head (Leahi), as seen from the Tower Wing of the Moana Surfrider Hotel. I was there to videotape a Japanese tourist wedding couple get ready for their ceremony and photo shoot.
Posted by Blue Wave 707 at 00:53 No comments: 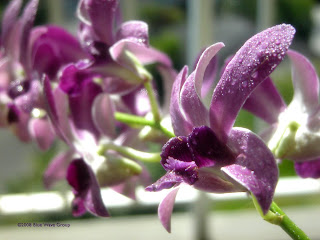 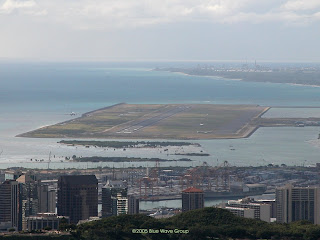 HNL's Runway 8R/26L, or "Reef Runway" was built from crushed coral and reclaimed land to handle additional traffic for outbound flights for commercial and military flights.

I took this photo from the Pu‘u ‘Ualaka‘a State Wayside Park (or Mount Tantalus Lookout). In the foreground is part of the downtown Honolulu skyline, and Honolulu Harbor. There's a Continental Airlines 767-400 about to touchdown on Runway 26L, with a Northwest Airlines 757-300 holding for departure, and an Aloha Airlines 737-200C taxiing toward the cargo ramp. In the background is the ‘Ewa plain of west O‘ahu.
Posted by Blue Wave 707 at 06:25 1 comment: 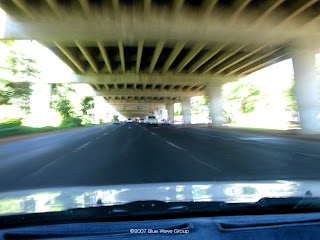 Driving under the viaduct that Nimitz Highway runs below Interstate H-1.
Posted by Blue Wave 707 at 12:42 1 comment: 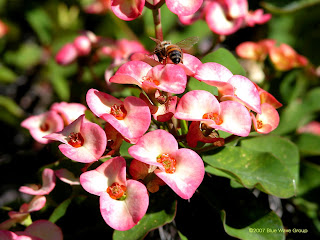 This honeybee pollenates a bunch of euphorbia flowers.
Posted by Blue Wave 707 at 00:01 1 comment: 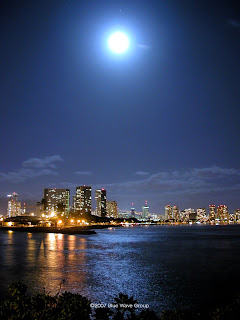 The moon rises above Waikīkī and metro Honolulu.
Posted by Blue Wave 707 at 00:42 3 comments: 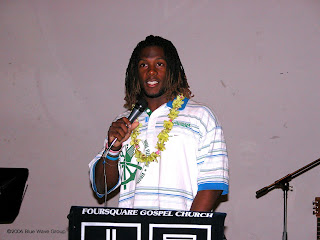 Davone decided to declare his eligibility for the 2008 NFL Draft (and forego his senior season) after the Warriors completed a 12-1 season that achieved a 12-0 regular season, the 2007 WAC Championship, but a loss to the University of Georgia Bulldogs in the 2008 Sugar Bowl.

I took this shot of Davone Bess when he spoke at a Hope968 worship service. He spoke of his upbringing, life challenges and victories, the Warriors, and his faith in the Lord. 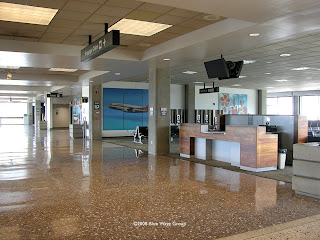 At the end of this past March, Aloha Airlines shut down its passenger operations after 61 years of business. After its demise, the Ma kai Pier of HNL's Inter-island Terminal has remained a ghost town complete with the decor of its former tenant.

However, in mid-November, Mokulele Airlines will occupy the Ma kai Pier, with their new inter-island jet service, that will compete against Hawaiian Airlines and Mesa Air Group's go!.

I took this photo this past July, while doing an article about HNL for the October 2008 issue of Airliner World magazine.
Posted by Blue Wave 707 at 00:15 No comments: 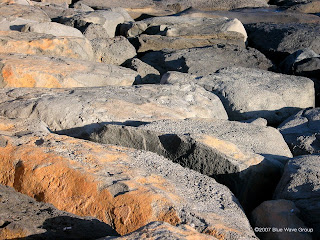 These large boulders form the breakers that front Kaka‘ako Waterfront Park.
Posted by Blue Wave 707 at 00:14 No comments:

A Man & His Plane 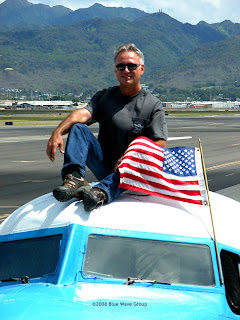 My friend Bill is the director of maintenance for Kamaka Air, an inter-island cargo airline. He's sitting atop their Douglas Super DC-3, in a pose for their website, that he asked to take. I was on a forklift that raised us up to match the height of the top of the flight deck.
Posted by Blue Wave 707 at 00:08 1 comment: 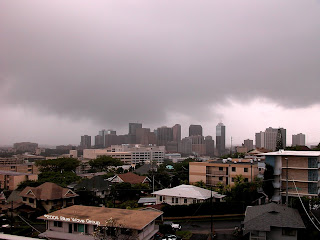 Canoe On A Wave 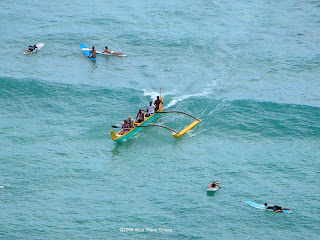 An outrigger canoe with a group of tourists rides a wave among the surfers in front of Waikīkī Beach.

I took this photo while videotaping a couple getting ready in their hotel room. While the bride was changing into her gown, I waited on the lanai with my cameras, and got this one.
Posted by Blue Wave 707 at 00:50 1 comment: 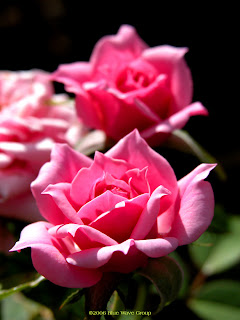 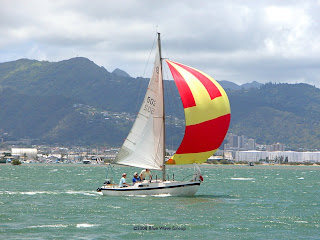 This sail boat rides the winds in Ke‘ehi Lagoon on a sunny Sunday afternoon.

They'll probably be doing this today as it's Columbus Day, a holiday for most people.
Posted by Blue Wave 707 at 00:28 1 comment: 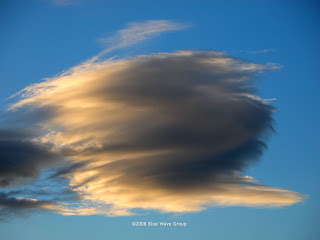 No, this is not a Photoshop motion blur shot! It looks like some high-speed, high-altitude winds smudged what was once a puffy cloud.
Posted by Blue Wave 707 at 00:23 1 comment:

Yellow and magenta orchids against its green leaves.
Posted by Blue Wave 707 at 00:12 No comments: 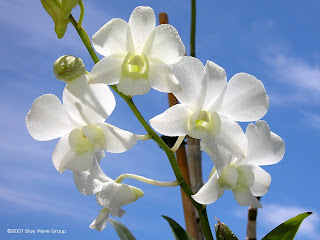 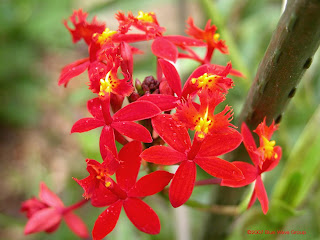 I came across these fire red wild orchids in a public community garden.

I took the phrase "En Fuego" from former ESPN SportsCenter anchor Dan Patrick, who would use it on a hot player during game highlights.
Posted by Blue Wave 707 at 00:39 1 comment:

These white orchids were used as a "carpet" for a bridal aisle in a wedding I videotaped. I thought what a waste of God's precious and beautiful creations.
Posted by Blue Wave 707 at 00:53 1 comment:

Orchid On The Rocks 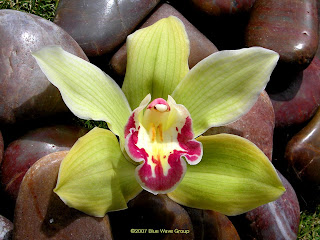 This orchid among river rocks was one of several that lined the aisle of the wedding that I got "What Was I Thinking?" photo.
Posted by Blue Wave 707 at 00:36 1 comment: 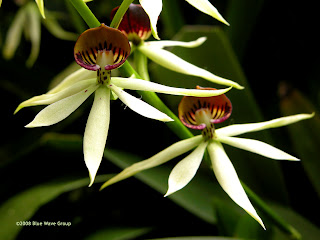 Got these unusual looking ones from the orchid wall at the Kahala Hotel & Resort.
Posted by Blue Wave 707 at 00:02 No comments: 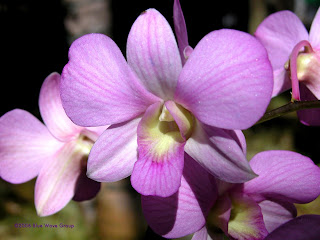 This month's theme week is "Orchids". I guess you may have noticed that orchids are the majority of the flowers I photograph. I do have several plants on my lanai, though most of this week's photos were taken elsewhere.

I was in downtown to meet a friend for lunch one day, and got this shot of these orchids, before I met up with him. These orchids were part of several plants for sale at an open market on Fort Street Mall.
Posted by Blue Wave 707 at 00:06 No comments: 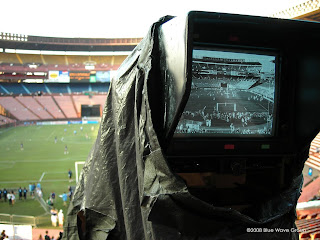 During the Pan Pacific Championship Cup this past February, we had re-positioned our Camera 2 from the north end zone's upper concourse to the south end zone's lower concourse, to get a better angle of the soccer tournament.

Here's a view of the Aloha Stadium "pitch" from both the videocamera, and the outside. This was taken during warm-ups prior to the Los Angeles Galaxy vs Sydney FC match.
Posted by Blue Wave 707 at 00:50 No comments: 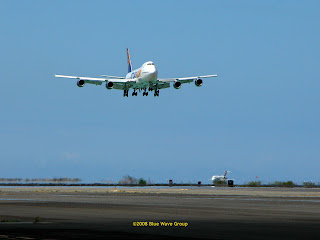 This Atlas Air Boeing 747-200F is seconds away from touching down on HNL's Runway 4R. Atlas operates contract cargo flights for Qantas, flying cargo from the mainland USA to Australia. These 747s make a fuel stop at HNL before continuing Down Under. Off in the heat haze, a Hawaiian Air Boeing 717-200 waits for its take-off clearance on Runway 8R. Before the 717 can depart, there has to be a short wait for the 747's wake vortex to dissipate, otherwise the 717 could encounter turbulence during its take off, which could be quite hazardous.
Posted by Blue Wave 707 at 00:38 No comments: 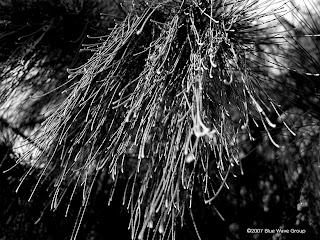 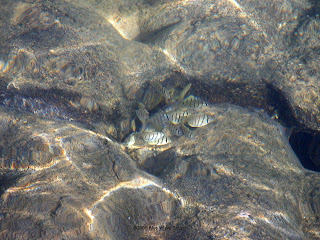 A bunch of littles fishes feed upon the rocks near the boat ramp at the Hee‘ia Kea Boat Harbor.
Posted by Blue Wave 707 at 00:42 2 comments: