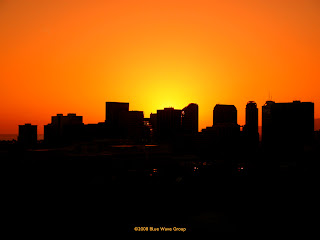 The sun sets behind the downtown skyline during one of our vog attacks.
Posted by Blue Wave 707 at 00:17 1 comment: 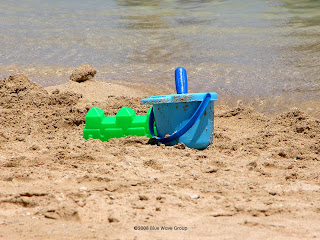 A child's beach toys left unattended while he plays in the water.
Posted by Blue Wave 707 at 00:54 No comments: 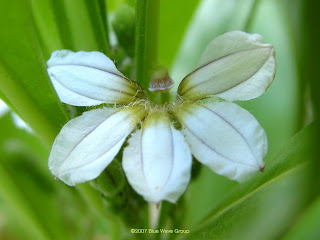 The naupaka plant is commonly found around the coastline of Hawai‘i, as well as other parts of the Pacific region. One feature is the half-flowers. There are two types of naupaka in Hawai‘i, the naupaka kai (grows near the ocean) and naupaka kahakai (grows in mountainous areas)

There is an ancient Hawaiian legend that the because of the half-flowers, the naupaka kai and the naupaka kahakai were two lovers that were separated, and that when brought together, they form one whole flower.
Posted by Blue Wave 707 at 00:41 1 comment: 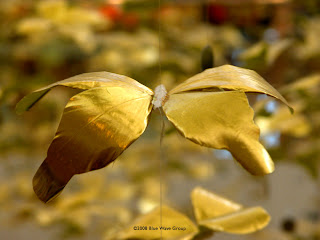 The local Nieman Marcus department store has hundreds of butterflies made of bird feathers that are strung from the ceiling where the escalators are. Recently, they changed from the white butterflies to gold.
Posted by Blue Wave 707 at 00:40 No comments:

Ready For Some Football, Eh? 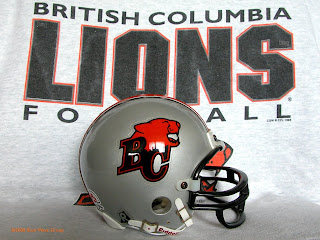 The 2008 Canadian Football League regular season gets underway this week. My favorite team, the BC (British Columbia) Lions, begins their '08 campaign for the Grey Cup on the road against Western Division rival Calgary Stampeders tonight. Yes, that's my mini-helmet and my t-shirt.

How did I get to like the CFL? Back in '82, the NFL had a labor dispute, and ESPN had the brains to put CFL games to stem the loss of football on TV. Since that time, I got hooked. In fact, I enjoy the CFL more than the NFL, due to the speed of the Canadian product, and watch it whenever I can. And yes, I have been to a CFL game, a Lions one in fact, and enjoyed it all the more. 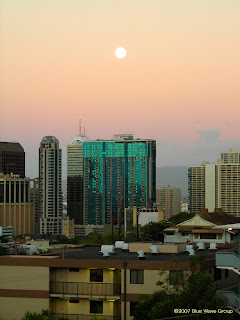 The moon sets as the dawn sky turns orange as the sun rises behind me.
Posted by Blue Wave 707 at 00:27 No comments: 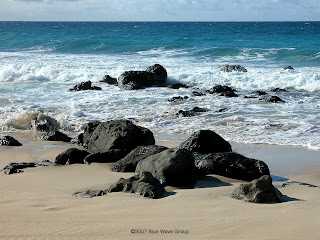 The irresistable force meets the immovable objects. Waves pound against these rocks at an O‘ahu beach.
Posted by Blue Wave 707 at 00:46 No comments:

Eye In The Sky 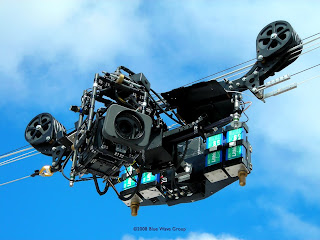 One of the coolest video gadgets around is the Fly Cam. Riding on a series of wires, the camera can zip along a path at speeds up to 100mph, and can swivel 360° horizontally, and 180° vertically.

The next time you're watching a sporting event, concert, or special event with moving high perspective, it might be a Fly Cam.
Posted by Blue Wave 707 at 00:35 1 comment: 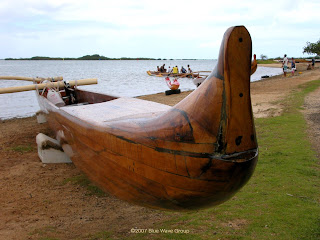 One of the big summer activities in Hawai‘i are outrigger canoe races ... Ke‘ehi Lagoon hosts some of the races during summer weekends.
Posted by Blue Wave 707 at 00:33 No comments: 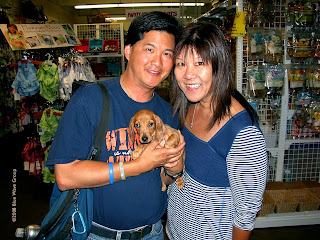 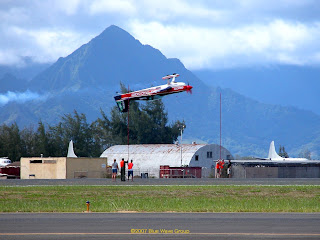 World-renowned aerobatic pilot Patty Wagstaff shreds some paper streamers with the prop blades of the Extra 300 she's flying. Wagstaff performed at the 2007 Blues On The Bay air show as the headlining aerobatic pilot, ahead of the US Navy's Blue Angels. 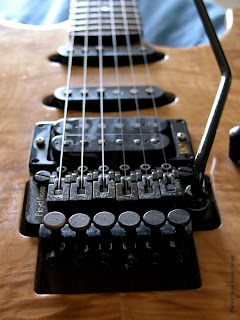 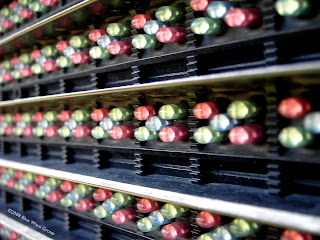 If you've been to any stadium, you've probably seen a large video screen that shows the replays. Sony's Jumbotron is one of the more common ones. In fact, Sony even makes a "portable" model which is transported in modules (each one being about five by seven feet, and weighing a couple hundred pounds). The total screen was five modules high by seven modules wide, or 25 feet by 35 feet once it was assmebled.

During the Na Lei Aloha Foundation's Lantern Floating this past Memorial Day, two High Definition Jumbotrons were assembled to show the event for those in attendance.

Today's photo is of some of the thousands of light emitting diodes (LEDs) that make up each module. No, I wasn't about to count how many LEDs were in each module ... I'm just guessing.
Posted by Blue Wave 707 at 00:40 1 comment: 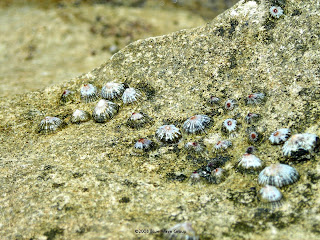 Opihi are a type of limpets that live on shoreline rocks around Hawai‘i, and are a delicacy in Hawaiian cuisine. These were found on a beach on the west side of O‘ahu.
Posted by Blue Wave 707 at 00:05 2 comments: 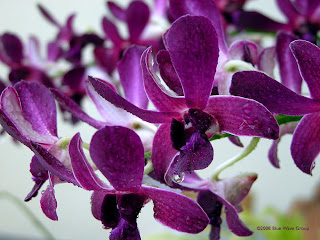 Udom Blue Angel is the type of orchid that Kathy bought me a couple of weeks ago. In bright sunlight, blue hues can be seen on the petals.
Posted by Blue Wave 707 at 00:16 1 comment: 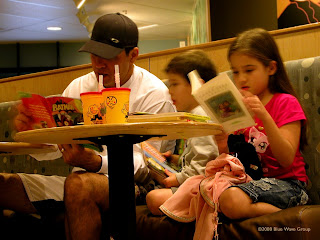 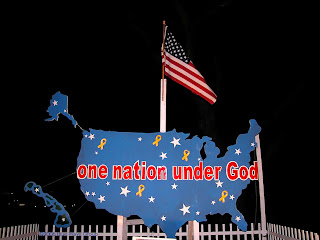 "I pledge allegiance to the Flag of the United States of America and to the Republic for which it stands, one nation under God, indivisible, with liberty and justice for all." 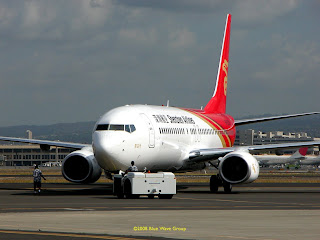 This Shenzhen Airlines Boeing 737-800W, B-5379, is being pushed out of its parking stand after overnighting at HNL. B-5379 is a brand new airliner being delivered to Shenzhen Airlines (Shenzhen, Guangdong, China) from the Boeing Commercial Aircraft facilities at Boeing Field (BFI), in Seattle, WA.

Due to the range of the aircraft, about 3,000 miles, 737 delivery flights to Asia usually transit through HNL, then island hop across the western Pacific Ocean toward their new home. Usually, there are several pilots and staff that travel with the new airliner.

B-5379 is getting ready to depart for Majuro (Marshall Islands) on its next leg across the Pacific as "Shenzhen Air 5379" or CSZ5379. The guy on the left is communicating with the flight crew and the driver of the push tractor.
Posted by Blue Wave 707 at 00:03 1 comment: 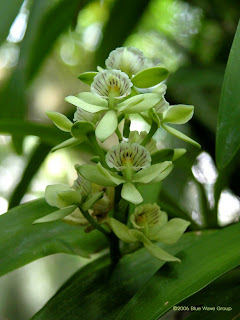 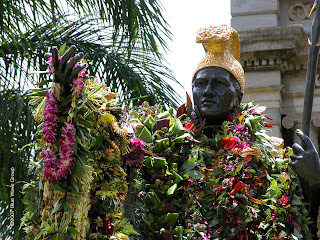 June 11th is the day we in Hawai‘i honor King Kamehameha I. Today's photo was from last year's dressing of the statue.
Posted by Blue Wave 707 at 00:19 1 comment: 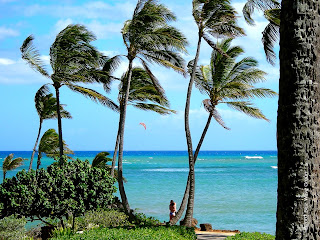 A couple embraces among the palm trees that line Kahala Beach, while a para-surfer cathes some waves and air in the background.
Posted by Blue Wave 707 at 00:45 1 comment: 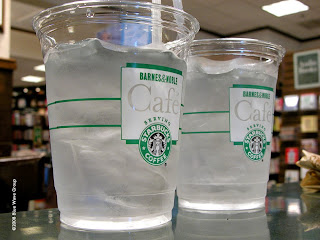 I just picked up my main camera from repair, and was playing around with it while Kathy & I sat in a Barnes & Noble browsing magazines and having our coffee fix.
Posted by Blue Wave 707 at 00:03 1 comment: 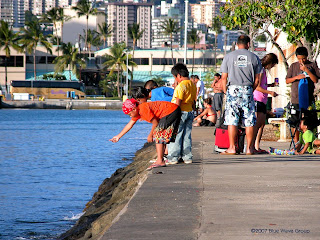 These boys try out hand line fishing at Kewalo Park one afternoon.
Posted by Blue Wave 707 at 00:04 No comments: 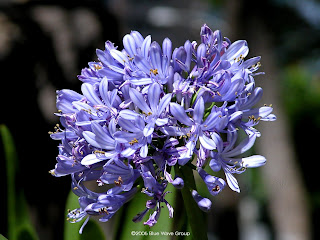 The uki uki is a native Hawaiian lily that is another popular flower found in landscaping ... it comes in white, or in shades of blue, lavender, and purple.
Posted by Blue Wave 707 at 00:06 No comments: 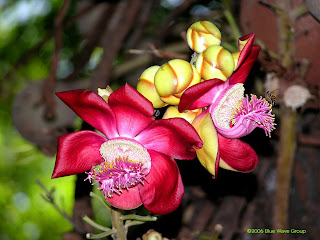 These unusual looking flowers belong to the cannonball tree. Why you ask? There are fruits that look like cannonballs that will fall from the tree, which tends to grow to heights around 30 feet. There was a warning sign denoting the falling object hazard of these fruits, which could cause severe injury. There were a number of fallen fruit on the ground, and are about the size of a small cannonball. The flowers themselves are quite interesting to look at.
Posted by Blue Wave 707 at 00:15 1 comment: 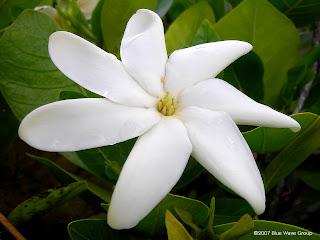 The tiare, or theTahitian gardenia, is another commonly found flower in Hawai‘i. It's a favorite of girls (or women) who wear a flower above their ear to denote whether they are single (right side) or spoken for (left side).

The tiare can also be seen on the tail of Air Tahiti Nui's airliners
Posted by Blue Wave 707 at 00:43 1 comment: 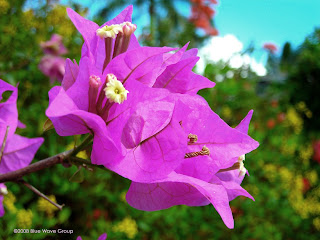 One of the most ubiquitous non-native flowers around Hawai‘i is the bouganvillea. It comes in many different colors, and the shrubs can grow quite huge in the wild, while shrubs can be even kept in a fairly large pot as well.
Posted by Blue Wave 707 at 00:31 No comments: 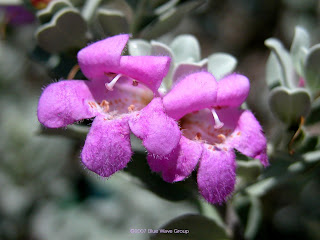 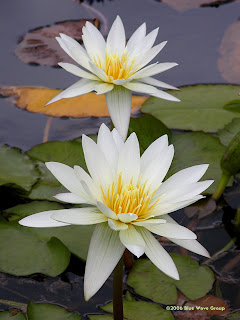 A pair of waterlilies taken the Hawai‘i Convention Center.
Posted by Blue Wave 707 at 00:15 1 comment: 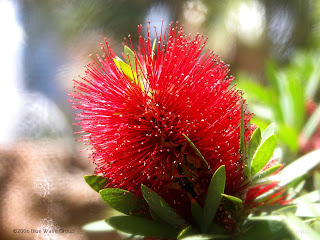 This month's theme week is "Non-Orchids", flower photos ... and not one of them this week, are orchids.

One of the native flowers of Hawai‘i is the Lehua. I got this photo on the grounds of Kawai‘ahao Church, before I videotaped a Japanese tourist wedding.
Posted by Blue Wave 707 at 11:47 No comments: