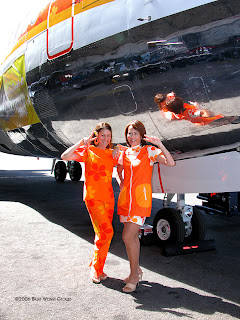 Aloha Airlines flight attendants Jodi (left) and Nina flash the peace sign, in a pose wearing Aloha Airlines 1970s-era uniforms at the media event unveiling of the Funbird colored 737-200.
Posted by Blue Wave 707 at 00:01 No comments: 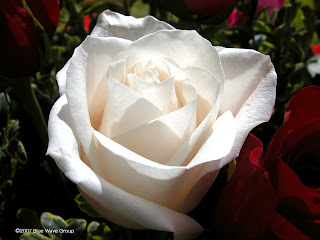 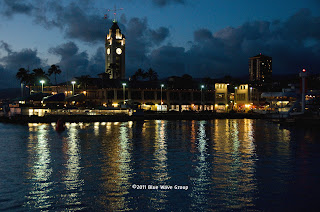 A night shot of Aloha Tower with lights reflecting off the water.
Posted by Blue Wave 707 at 00:33 No comments: 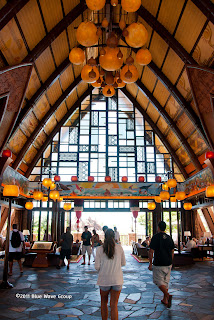 The Aulani Resort opened a few weeks ago, and held a huge grand opening last week. The Disney Resort & Spa in the Ko Olina Resort area is the newest hotel development on O‘ahu that features two towers (one is a hotel, and the other is for Disney Vacation Club members), and a waterslide/pool area. It's the first Disney resort that is not part of one of their theme parks. A few of the Disney cartoon characters, dressed in beach wear, walking around the pool area during the day.

Today's photo shows the main lobby area, which is based on an ancient Hawaiian gathering hall. We went there to celebrate Kat's birthday at ‘Ama ‘Ama, one of the resort's restaurants.
Posted by Blue Wave 707 at 00:13 No comments: 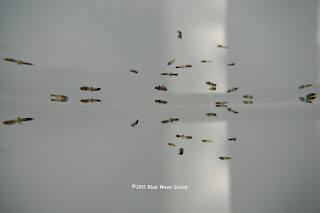 Over a dozen baby guppies in a bucket with their reflection on the surface of the water, taken with my waterproof point & shoot.
Posted by Blue Wave 707 at 00:06 No comments: 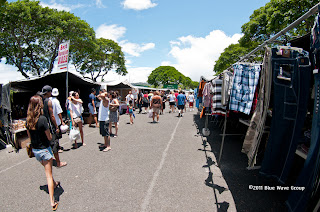 The Aloha Stadium Swap Meet is popular with both locals and tourists. It's a bargain hunter's place to go.
Posted by Blue Wave 707 at 00:33 No comments: 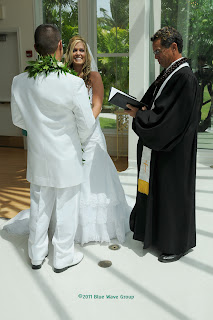 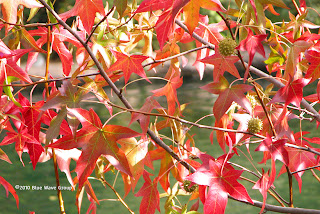 Today is the Autumnal Equinox, or the first day of autumn.
One thing about Hawai‘i is, that we really don't have any trees which their leaves turn colors. So, I got this photo while we were walking around Disneyland last November.
Posted by Blue Wave 707 at 00:08 No comments: 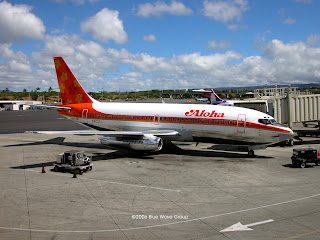 One of the most colorful airline color schemes was the Aloha Airlines "Funbird" livery in the 1970s. The airline had one of their 737-200s re-painted for their 60th anniversary celebration a few years ago.
Posted by Blue Wave 707 at 00:59 No comments: 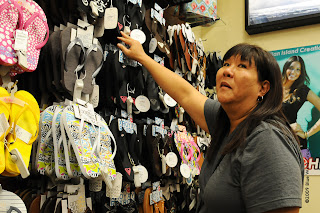 Happy Birthday Hunny! :-)
I snapped this shot while Kat was shopping for slippers in a local surf shop.
Posted by Blue Wave 707 at 00:55 No comments: 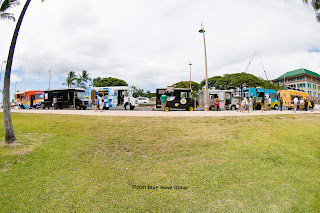 Taco‘ako Tuesday is a weekly food truck event held at the entrance of the Kaka‘ako Waterfront Park. It features several gourmet food trucks during lunch hour.

We've tried the food from most of the trucks pictured, and they are all quite good.
Posted by Blue Wave 707 at 00:35 1 comment: 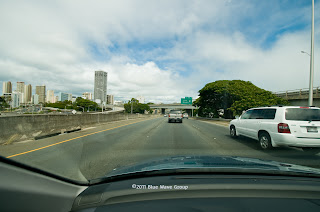 Sunset From The Pacific 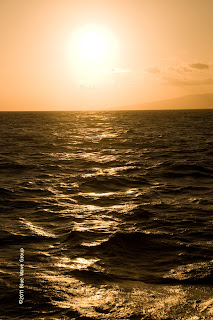 Lounging In The Water 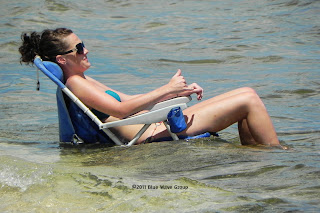 During one of our trips to the beach, this woman placed her beach chair in the water, and had her friend take a photo of her ... and so did I.
Posted by Blue Wave 707 at 00:24 No comments: 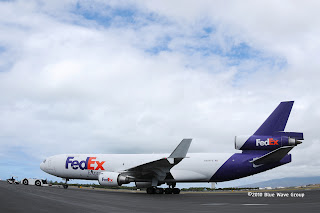 A distorted lens view of this FedEx MD-11F being pushed out of its hard stand. During the push, the flight crew  began starting all three engines.
Posted by Blue Wave 707 at 00:11 No comments: 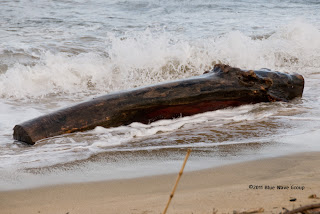 This log rolls in the surf after being washed into the ocean after a late spring storm.
Posted by Blue Wave 707 at 00:37 1 comment: 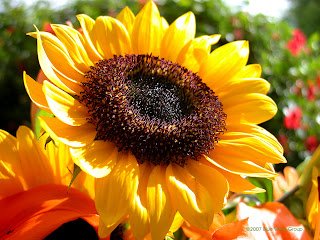 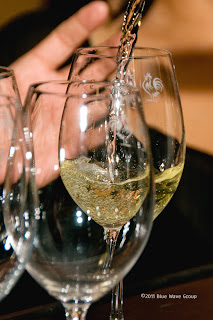 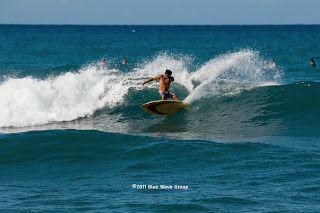 A late summer surf swell hit the southern shorelines of the Hawaiian Islands last week. Wave face heights reached ten feet. On this particular day, I caught the tail end of the swell, where heights reached four to six feet.
Posted by Blue Wave 707 at 00:30 1 comment: 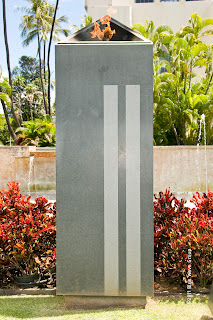 It's hard to imagine that it has been ten years since the horrific terrorist attacks of September 11th in New York City, Washington DC, and Pennsylvania. Today is the National Day of Remembrance. We pay tribute to the thousands who perished on that fateful day, and pray that something like this never happens again.


This eternal flame memorial was erected a couple of months after the attacks in front of Honolulu Hale.
Posted by Blue Wave 707 at 00:13 1 comment: 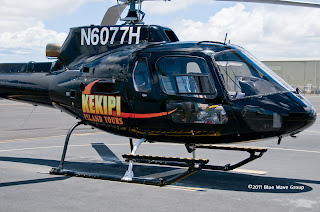 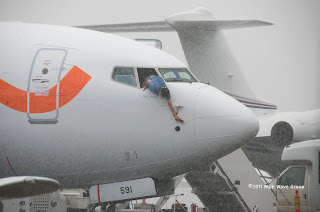 During a recent delivery flight from Boeing Field, this Shandong Airlines 737 and crew were greeted with a heavy downpour. Even in the rain, one of the Shandong pilots had to reach outside to cover the pitot tubes while the airliner overnighted.
I had to take cover in a hangar to get the shots. I did get wet too, but brought along a plastic bag to keep my camera dry ...
Posted by Blue Wave 707 at 00:50 1 comment: 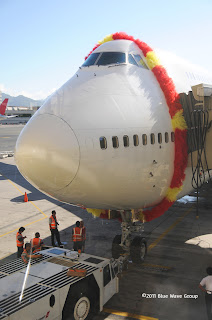 This giant red and yellow lei was placed around the forward section of this Japan Airlines Boeing 747-400, as it made the airline's final international 747 flight.
Posted by Blue Wave 707 at 00:39 1 comment: 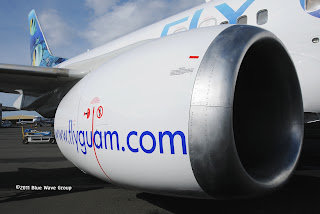 An up-close view of this CFM56 engine that powers this Fly Guam Boeing 737-400. The ground clearance of these engines are only 18 inches. The diameter of the intake is almost five feet.
Posted by Blue Wave 707 at 00:56 1 comment: 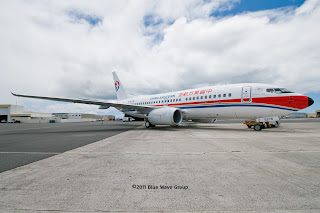 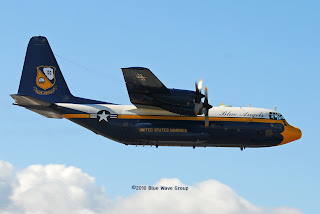 "Fat Albert", the US Marine Corps C-130T Hercules, assigned to the US Navy's Blue Angels, makes a low pass over the Marine Corps Air Field Kāne‘ohe Bay runway. The cargo plane made its own flight demonstration prior to the six fighters' performance.
Posted by Blue Wave 707 at 00:26 No comments: 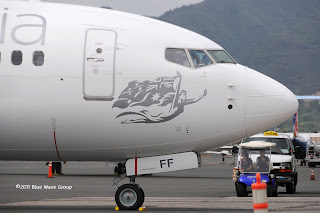 The theme week for September is "Plane Pix Vol 3".
Leading off, is a shot of the nose section of a Virgin Australia Boeing 737, that bears a flying woman, called "Scarlet Woman" with the Australian flag. Their British counterpart, Virgin Atlantic, has a similar image, with the Union Jack. The 737 was making its delivery flight from Boeing Field to Melbourne, Australia, with stops at Honolulu, and Nadi, Fiji.
Posted by Blue Wave 707 at 00:42 1 comment: 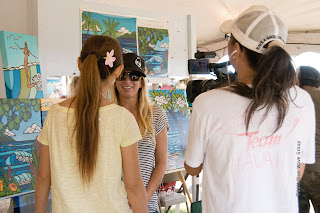 Local artist Heather Brown (center) is interviewed by a crew for a Japanese TV news magazine at the 2011 Hale‘iwa Art Festival, a few weeks ago. Heather did a commemorative piece for the Matsumoto Store, when it celebrated its 60th anniversary.
Posted by Blue Wave 707 at 00:32 No comments: 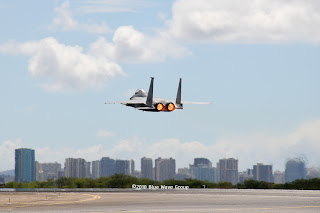 A Hawai‘i Air National Guard F-15C Eagle skims the Reef Runway seconds before performing its last "Hang Ten" maneuver, and departing for the mainland. A year ago, the Eagles were re-assigned, and replaced by F-22A Raptors. The metro Honolulu skyline is off in the distance.
Posted by Blue Wave 707 at 00:30 1 comment: 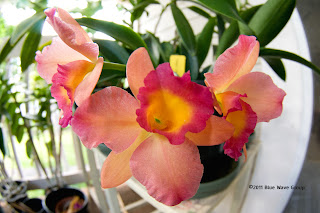 A trio of "Fantasia Delight" orchids shot with a fish-eye lens.
Posted by Blue Wave 707 at 00:22 No comments: