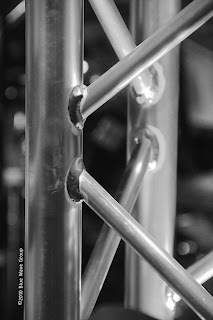 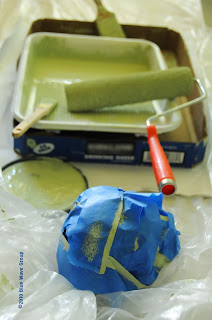 Our second phase of painting, was our bedroom, which we painted this shade of green in the roller tray. In the foreground, of it is a ball of painter's tape we used to mask off parts of the bedroom. I took this after we finished the major parts of the painting.
Posted by Blue Wave 707 at 00:07 No comments: 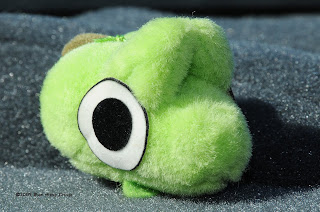 The logo for Nippon Television (NTV) is this neon green pig. I got this little porker in a gift bag given by an NTV reporter and director whom I worked with several years ago. This little pig sits in my car.
Posted by Blue Wave 707 at 00:04 2 comments: 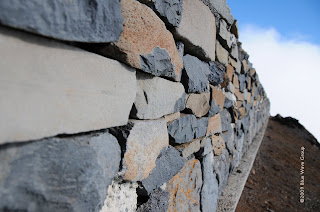 Running On The Beach 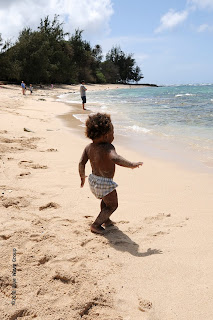 This little boy runs toward the ocean at Pahipahialua Beach. Even covered with sand, it didn't seem to faze him from playing with his siblings.
Posted by Blue Wave 707 at 00:32 2 comments: 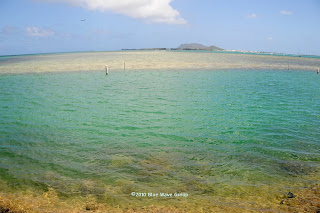 At southern end of Kāne‘ohe Bay is Marine Corps Base Hawai‘i at Kāne‘ohe Bay on the Mokapu Peninsula, which is seen from the He‘eia Kea Boat Harbor.
Posted by Blue Wave 707 at 00:49 No comments: 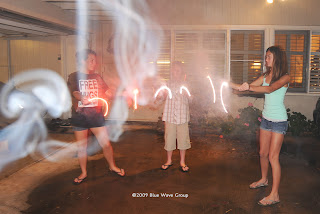 Smoke trails toward me from the sparklers that our nieces and nephew were playing with on New Year's Eve.
Posted by Blue Wave 707 at 00:00 1 comment: 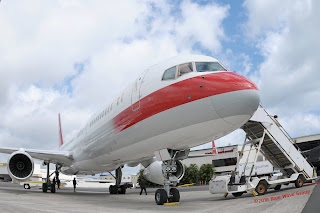 PrivatAir is a Swiss-based business and charter aviation firm that flies globally. A few weeks ago, one of their Boeing 757-200 airliners, HB-IEE, stopped at HNL for a few days and spent another few days at Kahului, Maui. This 757 seats only 49 passengers luxuriously, while the same airliner with a commercial airline can seat over 200 passengers (depending on seating layout).

Passengers can be seen de-planing to board a mini-bus to take them to their hotel. I took this shot while driving down HNL's south ramp to get photos of the 757.

On a side note, the Rolling Stones chartered HB-IEE during their 2003 world tour. During U2's "All You Can't Leave Behind" world tour, the Irish rock band chartered one of PrivatAir's 737s.
Posted by Blue Wave 707 at 00:45 1 comment: 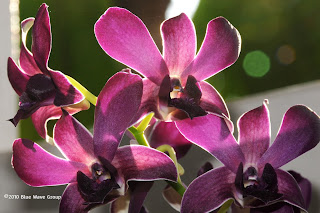 For my contribution for Earth Day ....

The sun backlights a bunch of orchids that recently bloomed.
Posted by Blue Wave 707 at 00:19 2 comments: 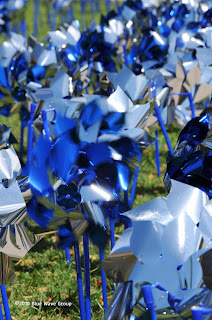 Prevent Child Abuse Hawai‘i is participating in the national Pinwheels For Prevention™ campaign. Hundreds of blue and silver pinwheels were placed on the Beretania Street side of the State Capitol lawn for the week. The pinwheel is the new symbol of the prevention of child abuse and neglect.
Posted by Blue Wave 707 at 00:54 2 comments: 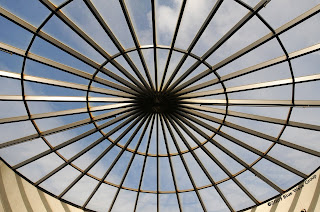 One of the skylights in the baggage claim area at the Kahului Airport.
Posted by Blue Wave 707 at 00:12 2 comments: 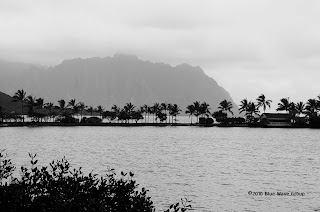 Along the windward coast line of O‘ahu, there are a few large man-made fish ponds built long ago. One of them is in Kahalu‘u, and is where the Aloha Ke ‘Akua Wedding Chapel is located. In the background, is the Ko‘olau Mountains, which line the entire windward side of the island. The strip of land lined with the palm trees separates the Kahalu‘u Fish Pond from Kāne‘ohe Bay.
Posted by Blue Wave 707 at 00:40 2 comments: 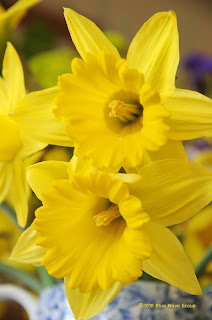 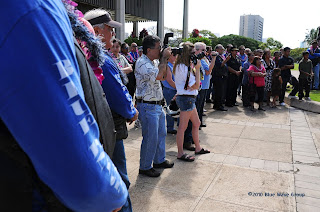 Wrapping up April's theme week, HPD Officers, Hawai‘i State Sheriff's deputies, and survivors of fallen officers listen to statements made by Herington, Governor Lingle, Kirk Caldwell, and Chief Kealoha about the cause of Concerns of Police Survivors (C.O.P.S.).
Posted by Blue Wave 707 at 00:51 No comments: 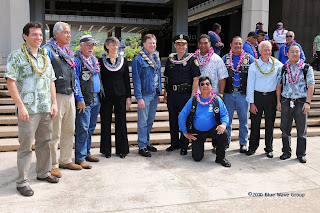 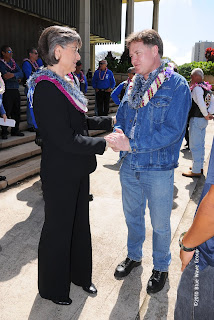 Harry Herington meets Hawai‘i Governor Linda Lingle at the steps of the Capitol.

Of the eight states that Herington has rode to, Governor Lingle was the first governor to meet with Herington, and issue a statement supporting his cause.
Posted by Blue Wave 707 at 00:06 2 comments: 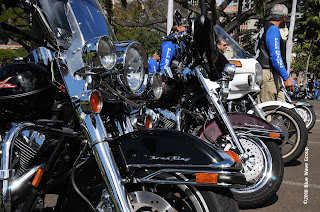 A close-up of some of the Harley-Davidson motorcycles lined up after arriving at ‘Iolani Palace. Before their arrival at the palace, Herington and the other riders made a brief stop at Honolulu Police Department headquarters a few blocks away to pay tribute to fallen HPD officers in the line of duty. Between HPD and ‘Iolani Palace, the Ride For COPS were given an HPD motorcycle escort by several current HPD Solo Bike Unit officers.
Posted by Blue Wave 707 at 00:50 1 comment: 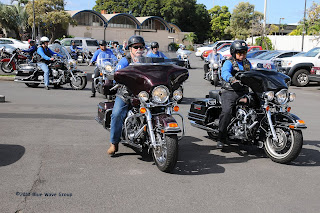 Members of the Blue Knights Motorcycle Club roll out of the Cycle City parking lot to begin the ride.
Posted by Blue Wave 707 at 00:33 2 comments: 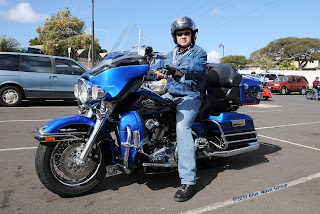 Harry Herington poses for this photo before leading the Hawai‘i Ride For C.O.P.S. from Cycle City to the Capitol Building.
Posted by Blue Wave 707 at 00:35 No comments: 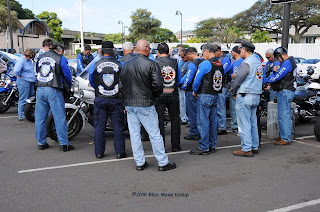 The theme week for April is "Ride For C.O.P.S.". It's a nationwide motorcycle ride and fundraiser led by former police office Harry Herington, who is riding to the capitol of each state in the Union. C.O.P.S. (Concerns Of Police Survivors) is an organization in all 50 states that assists the families of law enforcement officers killed in the line of duty. The fundraiser is raising money for the local chapters of C.O.P.S.

Before their ride from Cycle City to the Capitol Building, members from the Blue Knights and X-Solo Motorcycle Clubs along with NIC, Inc CEO Harry Herington prayed for their ride. So far, Hawai‘i has had the largest turnout of riders who rode with Herington to a state capitol.
Posted by Blue Wave 707 at 00:49 1 comment: 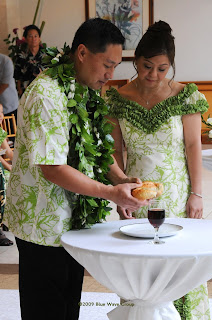 Todd & Dyann celebrate the Lord's Supper during their wedding ceremony.
Posted by Blue Wave 707 at 00:11 1 comment: 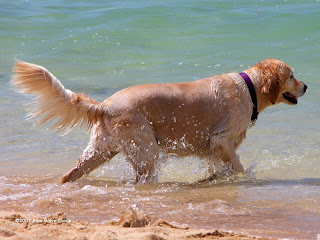 This Golden Retriever takes to the ocean at Mokulē‘ia Beach.
Posted by Blue Wave 707 at 00:33 1 comment: 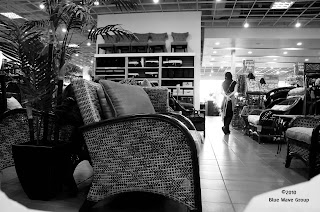 While Kat was looking around a Pier 1 Imports store, I took a seat in one of the giant lounge chairs. I was reviewing some shots we had taken earlier in the day, and sneaked off this shot while waiting for her.
Posted by Blue Wave 707 at 00:50 3 comments: 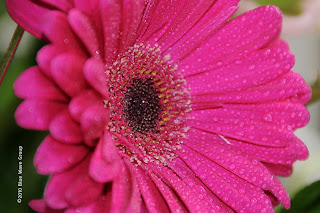 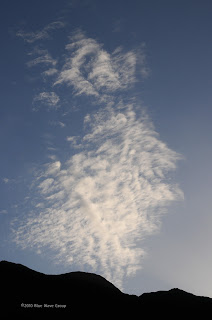 A cirrus cloud hovers over the Ko‘olau Mountains in the late afternoon. 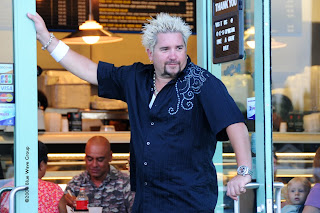 Other eateries profiled by "Triple D Goes Hawaiian" include Highway Inn, Hank's Haute Dogs, and Germaine's Luau. Guy also visited The Poke Stop (where today's photo was taken) and Rainbow Drive-in, and will be aired later.
Posted by Blue Wave 707 at 00:16 2 comments: 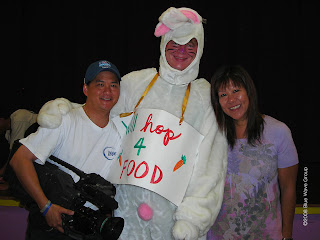 Kat & I wish you all a Happy Easter!

We took this photo a couple of years ago at Hope968's Easter Egg Hunt with John, who graciously volunteered to wear the Easter Bunny costume. Kat helped with the games, and I shot video for the church.
Posted by Blue Wave 707 at 00:58 1 comment: 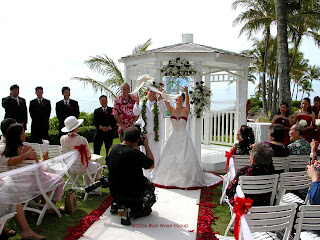 At the end of Kirk & Merilyn's wedding ceremony, they released a pair of doves.
Posted by Blue Wave 707 at 00:01 No comments:

Pierced For Our Sins 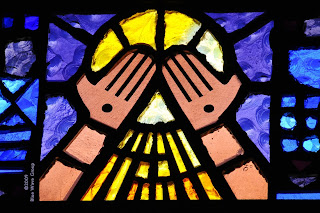 "But he was pierced for our transgressions, he was crushed for our iniquities; the punishment that brought us peace was upon him, and by his wounds we are healed"
Isaiah 53:5

Today is Good Friday, the day Jesus paid the ultimate price for all of our sins. Today's photo comes from St. Peter's Episcopal Church, after I videotaped a wedding. It shows His hands that were nailed to the Cross.
Posted by Blue Wave 707 at 00:42 1 comment: 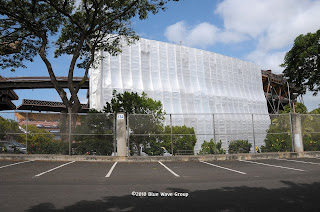 The State of Hawai‘i announced yesterday that it will completely cover Aloha Stadium with a white translucent synthetic fabric, and will use wind technology to keep the dome inflated. The state feels that the dome will preserve the 35-year-old steel structure into the 22nd Century. When completed, it will be re-named the Aloha Dome.

The stadium has been closed since February to facilitate the construction project. Because of our location in the middle of the Pacific, the salt air has continually attacked the steel, and caused an on-going issue of spending the money to fight corrosion. The dome must be completed before the middle of August, when the high school football season kicks off. Initially, the plan was to just cover the top of the stadium, but metallurgists with a structural engineering company suggested the entire stadium be covered. The Department of Accounting & General Services, which runs Aloha Stadium, and the Stadium Authority did not announce the cost of the project. Both repairing of the steel structure and the dome installation is happening at the same time.

It should be quite interesting when we return in August, to see how it affects our video broadcasts during the day. Night games shouldn't change much.

Today's photo shows the first phase of wrap that will form the new Aloha Dome.