After A Water Cannon Salute 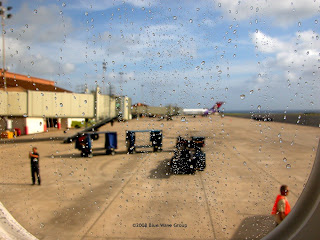 As part of the Mokulele Airlines E170 media flight, we were treated to a water cannon salute by two fire trucks from the Līhu‘e Airport Fire & Rescue Department. We received the salute right as were taxiing to the gate. The water drops on the window were taken seconds after passing under the arcs of water.

I have seen these salutes performed from the outside of the aircraft, as most people have, but this was the first time I had been in an airliner during a water cannon salute. It was like going through a car wash, and sounded like it too.

A film factoid ... The Līhu‘e Airport was also used in the final scene of the film "Don Juan DeMarco". It was pretending to be the Papa‘ete Airport in Tahiti. The giveaway was the artwork on the exterior of the terminal building facing the flightline. If I remember correctly, there might have been a cameo appearance by a jet of one of the two local inter-island airlines as well.
Posted by Blue Wave 707 at 00:17

I've never seen that kind of salute before. I've seen salutes done from fire boats where they shoot the water up in the air. Maybe this is similar. It made for a great shot!