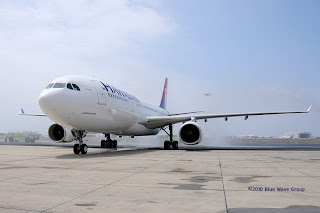 Two crash tenders from HNL's Airport Rescue Fire Fighters (ARFF) perform a water cannon salute to commemorate the arrival of Hawaiian Air's first Airbus A330-243, N380HA, "Makali‘i", earlier this year. As part of the media, we got to be front and center to this occasion. Seconds after taking this photo, I had to duck away avoid getting some of the spray from the water cannons.

Today is also the first Hawaiian Airlines first flight from Haneda International Airport, Tokyo, Japan, that arrives at HNL, as HAL458.  The first flight to Haneda left on the 17th.
Posted by Blue Wave 707 at 00:40

When did Haneda go back to inernational flights?
that's good news for us as my wifes Aunt lives close to it