Sayonara "Queen Of The Skies"! 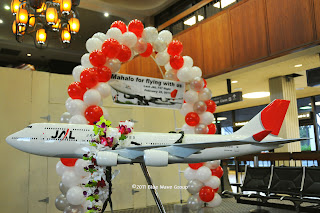 Yesterday, Japan Airlines flew the last passenger Boeing 747-400 flight. After 40+ years, JAL will be saying a fond "sayonara" to the Boeing Jumbo Jet family, that began in 1970 with their first 747-100. Monday's JAL75 to NRT (Narita International, Tokyo, Japan) with 421 passengers, was the final 747 flight. At HNL, the JAL HNL Station held a send off for the passengers and crew of this historic flight. A couple of dozen members of the Japanese media was aboard this historic flight.

In today's photo, a balloon arch with a photo banner was put up for passenger and crew to take pictures under, and a 747-400 model was brought out and adorned with lei. Also, the 747 photo on the banner, was one of a few photos I submitted to Japan Airlines for the event, as part of the 747 service to Hawai‘i.
Posted by Blue Wave 707 at 00:45

They gave it a good send off. I'm glad they used your photo for the banner!