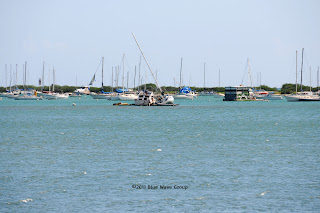 Several boats and piers in O‘ahu's Ke‘ehi Lagoon were damaged as a result of this past Friday's tsunami triggered by the M9.0 earthquake in Japan's Tōhoku Region. Though the surge on O‘ahu did not reach the forecasted six feet, it was enough to dislodge piers and boats, and moved them throughout the lagoon. Another several boats even sank because of collisions. According to reports nine of the ten small boat harbors across the Hawaiian Islands suffered damage to some extent. The state is trying to assess the dollar amount the damage caused.
Today's photo shows one of the damaged sailboats listing to its port side, that are being worked on. I took this photo from Ke‘ehi Park yesterday.
Posted by Blue Wave 707 at 00:30