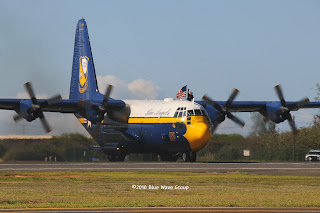 The theme week for June is "Blue Angels". In September 2010, the US Navy's Blue Angels headlined the 2010 Kāne‘ohe Bay Air Show. This year, the United States Naval Aviation Corps is celebrating its centennial anniversary.
Today's photo shows the Blue Angels' C-130T, nicknamed "Fat Albert", as it concludes it opening act demonstration, with a crew member popping out from the escape hatch to wave the American flag. The US Marines transport carries the aerial demonstration squadron's support equipment and personnel from show to show.
Posted by Blue Wave 707 at 00:35