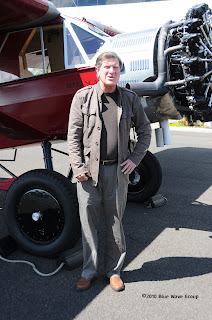 I was saddened to find out that Hawai‘i Magazine Editor John Heckathorn passed away yesterday. I had the privilege and pleasure to work with Mr. Heckathorn on a media flight that Hawaiian Airlines held on their Bellanca CH-300 "Pacemaker" that we were both on, in May 2010. Pictured above, is John posing with the CH-300 after our media flight.
The flight had turned out to be a blessing in disguise, as I was invited by Hawaiian Airlines to photograph the media flight for my own article that I was working on. Upon arrival to the fixed base operator where the Bellanca is kept, I was introduced to Mr. Heckathorn, who was also going to be on the flight. He asked who I was shooting for, and I responded that I freelance for airliner publications. He then asked if he could use my photos for his article, to which I obliged. I was surprised that he was going to use his iPhone to photograph the flight, since his magazine did not have a photographer available. They ended up using four of my photos for his article that appeared in the August 2010 issue. THat flight was a definite blessing.
My thoughts and prayers go out to the Heckathorn ‘ohana. John was truly a force in the publication scene here in Hawai‘i, and will be truly missed.
Posted by Blue Wave 707 at 00:42