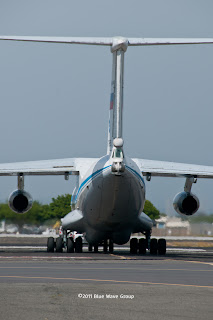 This Ilyushin Il-76 of the Russian Air Force was brought over President Dmitriy Medvedev's limousine and entourage vehicles for last month's APEC2011 Conference. Many of the cargo aircraft built during the Soviet-era had navigator's windows in the nose, and gunner's ports in the tail cone. It appears this IL-76 had its guns removed, but looks like the station can still be manned.
Posted by Blue Wave 707 at 00:03