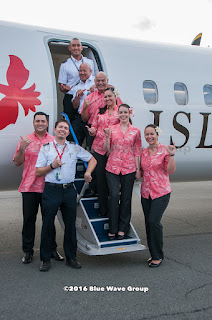 Pilots and flight attendants of Island Air pose on the steps of N681WP "Ola Kūpono", their first Bombardier Dash8-Q400NG, after it arrived on its delivery flight from Toronto, Ontario, Canada. I was contracted by the airline to capture the arrival on video and photo. Airline employees waited on the ramp to greet "Ola Kūpono" as it arrived from McMinneville, OR.
Sadly, the airline ceased operations a couple of years ago.
Posted by Blue Wave 707 at 00:08