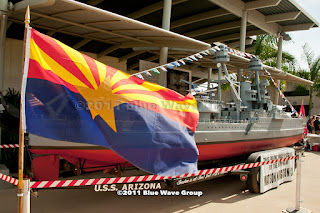 Tomorrow, December 7th, is the 79th anniversary of the attack on the Pearl Harbor Naval Station by the Imperial Japanese Navy. One of the US Navy battleships that were sunk in the attack was the USS Arizona (BB-39). This model of the battleship seen above, was brought to Pearl Harbor from Arizona, in December 2011 for the commemoration of the 70th anniversary of the attack.
Posted by Blue Wave 707 at 00:07