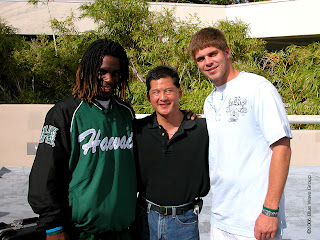 Today's my birthday, and what a better way to spend it, but by working the University of Hawai‘i Warriors football game against the visiting Boise State Broncos. The 15th-ranked (BCS), 10-0, Warriors are seeking their first Western Athletic Conference championship today, and a shot at a BCS bowl game.

I had my photo taken with All-American candidate wide receiver Davone Bess (left) and Heisman Trophy candidate quarterback Colt Brennan (right) at a Hope968 worship service last November. There's another photo of this lethal combo posted in September, at the beginning of their 2007 campaign.


Update 22:00 ... The Warriors beat the Broncos 39-27 to win the WAC championship! Warrior quarterback Colt Brennan set the a new career touchdown record of 126 (and counting), breaking the previous record held by Ty Detmer of BYU. What a birthday present & to be a part of history, as I was the end zone videographer for the Aloha Stadium JumboTron.
Posted by Blue Wave 707 at 00:09

Happy Birthday!! I hope you enjoy your day (and your team wins) and you have a great year ahead!!

HAPPY BIRTHDAY, IVAN!! You truly had an exciting day!!!! What an awesome pic!!!