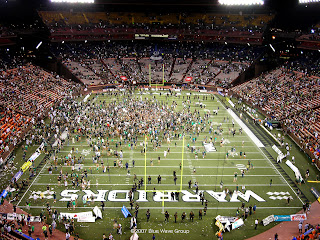 The University of Hawai‘i Warriors football team won its first outright Western Athletic Conference (WAC) championship by knocking off the Boise State University Broncos, 39-27, before a sold-out crowd of 50,000 people. Upon the clock reaching 00:00, hundreds of fans rushed onto the field mobbing the Warriors players and coaches. The Warriors finished 8-0 in the WAC, and are 11-0 for the season.

Warriors head coach June Jones accepted the WAC trophy presented to him by league commissioner Karl Benson. Quarterback Colt Brennan was hoisted above shoulders by overjoyed fans. The Field Turf of Aloha Stadium turned into a huge mosh pit as fans celebrated with the players and coaches.

The Warriors close out their 2007 regular season against the University of Washington Huskies next Saturday at Aloha Stadium, and await an invitiation to a BCS Bowl game.

I was honored to be a part of this historic event, as one of the JumboTron videographers, and was positioned in the north end zone, where i got this shot from.
Posted by Blue Wave 707 at 00:23

Hey - I was there! I did not get to take any "real" photos though since I was the "sherpa" for a friend who was shooting on assignment. It was certainly an awesome game to watch!