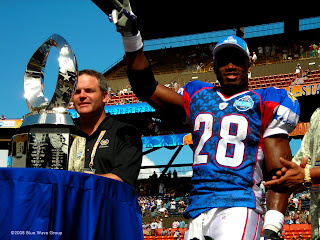 Minnesota Vikings rookie sensation running back Adrian Peterson was named the Dan McGuire Player Of The Game of the 2008 NFL Pro Bowl. The NFL's Offensive Rookie Of The Year had 16 carries for 129 yards, with the longest run being a 39-yard scamper during an NFC scoring drive. Peterson also scored two touchdowns in the game. His second TD sealed the NFC's 42-30 victory over the AFC. Peterson also won a Cadillac sedan for being named the 2008 Pro Bowl MVP.

I had the opportunity to be on camera during the first half, and personally videograph Adrian Peterson run the football. In the second half, I floor directed our field camera crew, and got to be a spectator ... I can see why he was voted MVP and Rookie Of The Year.
Posted by Blue Wave 707 at 00:31

You are so fortunate to have so many awesome opportunities to take all these wonderful pics!!! God is good isn't he!!

He's a lucky guy to get a trip to Hawaii, and he won a cadillac! You took a wonderful shot here. That must have been a fun day. The sun is so beautiful and bright there in Hawaii!